Documentaries: History and evolution of the Typical Orchestra

Home » Documentaries: History and evolution of the orchestras | PuraMilonga 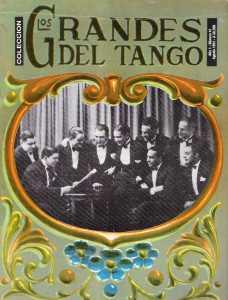 Latin America is defined as Typical Orchestra music training dedicated to interpretation of popular music of a region. The term is used to refer to medium-sized groups (gives 8 a 12 musicians). This term has been applied mainly to orchestras of Cuba, Argentina and Uruguay.

If Argentine and Uruguayan, the term was tied Typical Tango Orchestra. Originally, the tango was performed with guitars, flute and violin, then the bandoneon replaces the flute, revived a century later by Astor Piazzolla in his octet and nonet.

The origin del ends “Typical Creole Orchestra” It is due to the bandoneon, conductor and composer Vicente Greek (1888-1924). It is used in General, but it indicates an orchestral training with two or more violins and accordions. Usually these orchestras are composed of such tools that interpret, in the case of tango piano, bandoneon, violin, bass, guitar, flute, and in many cases, viola and cello.

Originally, musicians had to “Rotate”, or turn passing of local locally. From the moment the tango begins to fit in areas with high social, is aggregated piano, that is not portable (It was originally played in Bar suburban and brothels), musicians then became more sedentary no longer being forced to bring their instruments here and there . 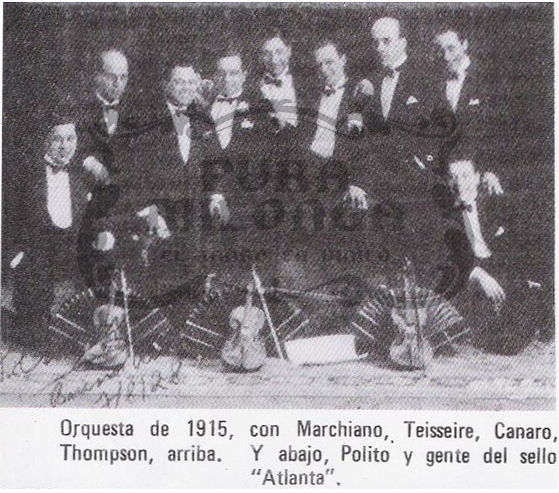 The 1917 It can be considered the launch Typical Orchestra ( Firpo Canaro Orchestras ).
Roberto Firpo and Francisco Canaro founded the Party of the Carnival in the city of Rosario ,from that moment the Tango begins to be accepted in popular taste, as the musical expression and undisputed "Porteña". 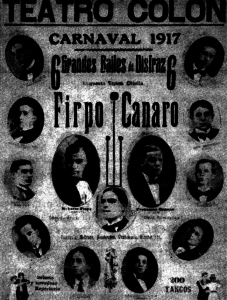 In 1924, violinist, conductor and composer Julio de Caro (1899-1980) created his sextet and marks the beginning of “Guardia Nueva”. He began to proliferate in the tango orchestras, a fundamental break in this genre. The tango is no longer interpreted “grilled” ( Arm or no score or musical arrangements ndt ), but with a musical language encoded in constant growth in the thirties and takes the tango to the splendor in the forties and continues to this day, where the style of’ Orquesta Typical is maintained by most young bands.

The Fathers of the typical orchestras
Francisco Canaro – Roberto Firpo 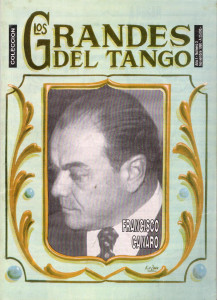 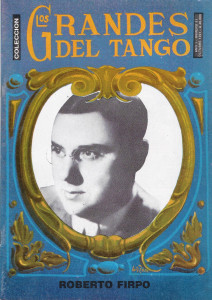 This remarkable musical duo, one pianist another violinist can be considered the parent of the typical orchestras, since they were pioneers in harmonizing the instruments and based on an amalgam of bandoneon, piano and bass and violins.

The two have tried through their formations differ in style of interpretation of tango.

At the beginning of 1900 Canaro joined the quartet as violinist Vicente Greco: 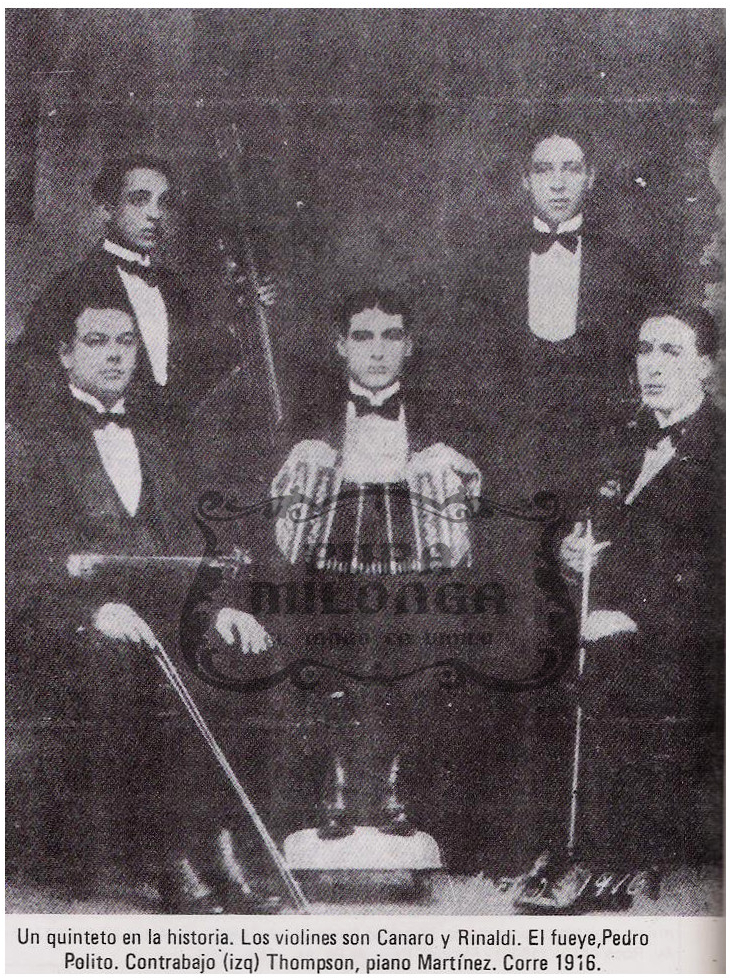 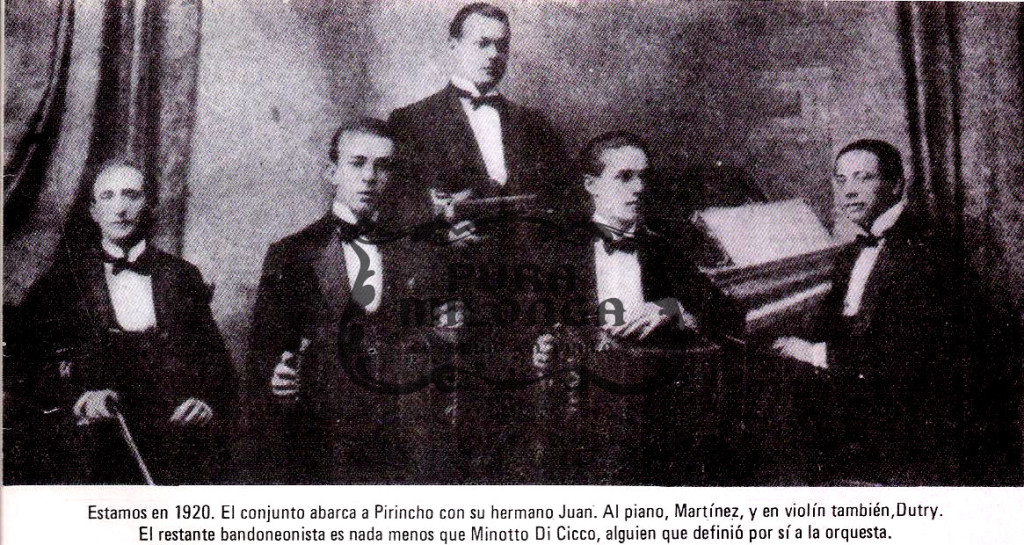 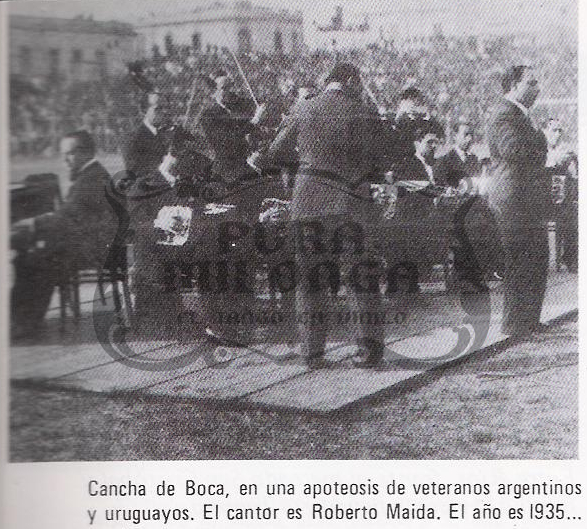 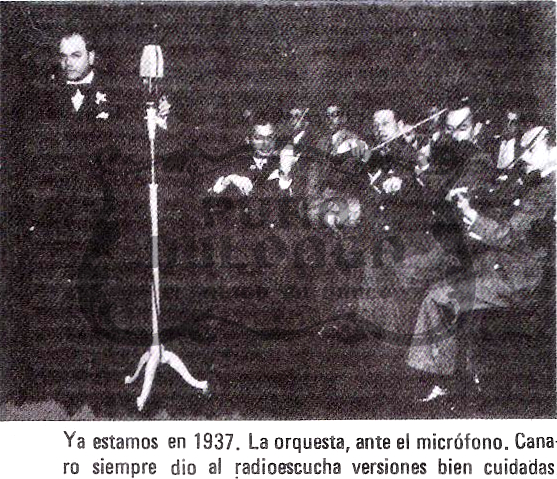 Firpo nel 1913 formed his quartet to play all'Armenonville the best small theater in Buenos Aires located between Calle Alvear and Tagle, the area more "good" of the city. He was responsible for the introducer of the Plan in the tango.

Roberto Firpo He is conducting the orchestra from the piano, with refined style.
In 1914 Adds new Orchestra musicians, that enrich the quality of performance of Firpo on piano: Tito Roccatagliata and Agesilao Ferrazano bandoneon and Alejandro Maitland on flute.
He debuted as a composer suggesting premiered his tango "Alma de bohemio", becoming the attraction of tango of his time, both as composer and performer.
Firpo has helped to structure the final composition Typical Orchestra, and it was one of the first evolutionists tango.

This teacher for many years ran a school for many brilliant artists of tango.

Of its authorship are some of the most famous songs in the repertoire of the tango, “Alma de Bohemio”, “Fuegos artificiales”, “Didi”, “El amanecer”, “Vea, vea” and others … He accompanied the duo Gardel, Razzano when they registered “El Moro”.

Firpo and Canaro they entered the bass, an instrument that has brought the necessary support rhythmic orchestra with his penetrating sonority.
In 1916 Francisco Canaro ( violin ) form his orchestra with musicians of high level, pianist Jose Martinez, bandoneon Osvaldo Fresedo and Pedro Polito, Rafael Rinaldi on violin, bassist Leopoldo Thompson. 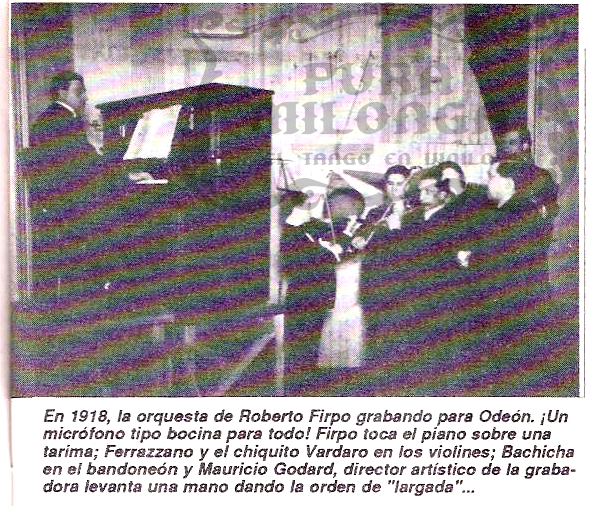 It was finally formed the typical sextet, two bandoneon, two violins, piano and double bass, which for many years it has been the identification of the orchestra typical.

The prestige achieved by these masters through their training was of such importance to monopolize the public interest period.

The methods of interpretation of Firpo and Canaro had a marked contrast, that led to the emergence of real fans.

The first clearly it evolved with a trend of slow, melodic, jealously preserving the nuances.

Canaro insensitive to influences harmonics instead gave his orchestra a faster pace, giving it a style more lively.

One can say that Firpo is what has amalgamated instrument Voices, while Canaro produced the rhythmic transformation of two to four.

Such was the counterpoint of styles and the impact in the public 1917 a businessman from Rosario hires two for the Carnival and encourages the merger of their orchestras.

The economic proposal was so advantageous that the two agreed and gave birth to a fabulous ensemble that would be the pioneer of what in the future will be the Gran Orquesta Typical.
They were part of the Orquesta Canaro Typical Fripo, musicians as Osvaldo Fresedo, Tito Roccatagliata, Agesilaus Ferrazano, Juan Carlos Bazan, José Martinez, Leopoldo Thompson, Cayetano Puglisi, Alejandro Michetti, Pedro Polito, Juan Bautista Dambroggio, and Alejandro Scottti. 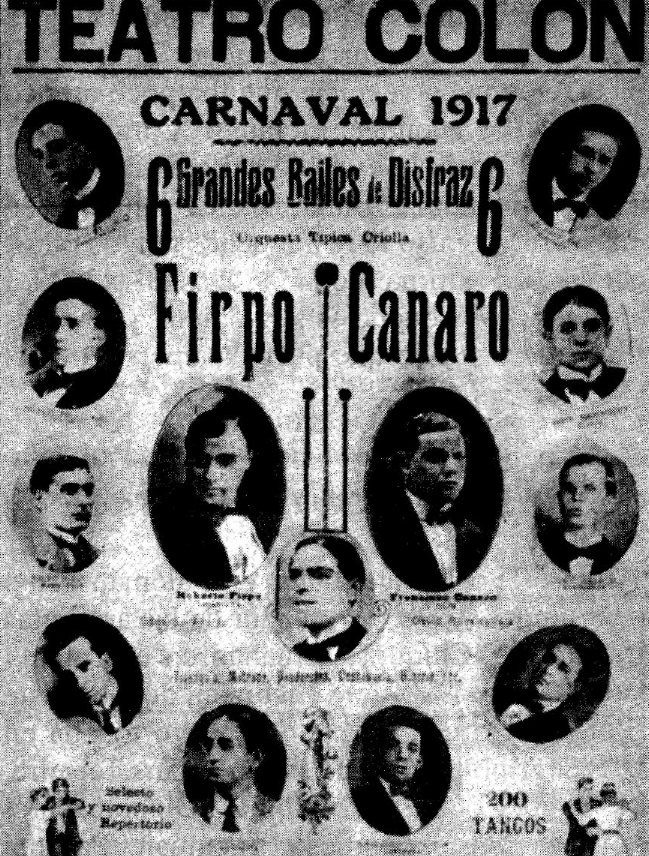 Canaro promotes the figure of Chanssonier or estribillista; Roberto Diaz, e Charlo, were the first singers its typical Orchestra.

Although many musicians were already living in France Argentina, the presence of Canaro in Paris, It marked the opening of a major market for the Argentine Tango..

Many of the musicians were not covered by the tour, to settle in Europe, why when he returned to Buenos Aires notevli incorporates other musicians to replace the musicians absent, Luis Petruccelli, Octavio Scaglione, Emilio Puglisi, Ernesto Bianchi, Lucio Demare are some substitutes tier.

It is said that in mid- 1920 They were perfectly defined the two flows across the musical trajectory presesente. Roberto Firpo was a prominent figure in the early days of tango. For many years he has maintained a standard of excellence, in terms of orchestral game. Suddenly, in 1935 It has a setback, back to basics, transforming his orchestra in a quartet, where he is again in charge of piano.

Concerned to maintain the purity of the music and the typical loyalty of form and content from popular soul.
The fact of returning to the root of the tango, with the quartet to play the style Guardia Vieja, It remains the slightest recognition to the hard work that has contributed to the evolution of tango music that places him among the leaders. 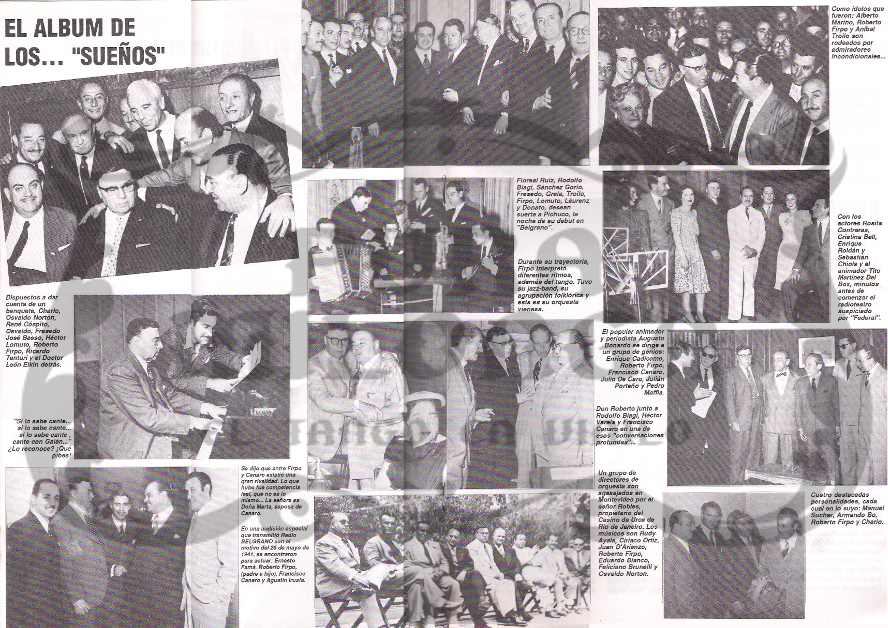 Francisco Canaro his counterpart, It continued with the development of interpretation, perhaps less refined, but more prone to bombastic and symphonic tango by incorporating sometimes excessive amount of musicians and singers.

Other branches of the Tango, as were Firpo and Canaro, They are De Caro and Fresedo, that with the same purpose, gave the Tango sound more spacious and colorful, It is producing great process that reached its splendor in the decade of the 40's.