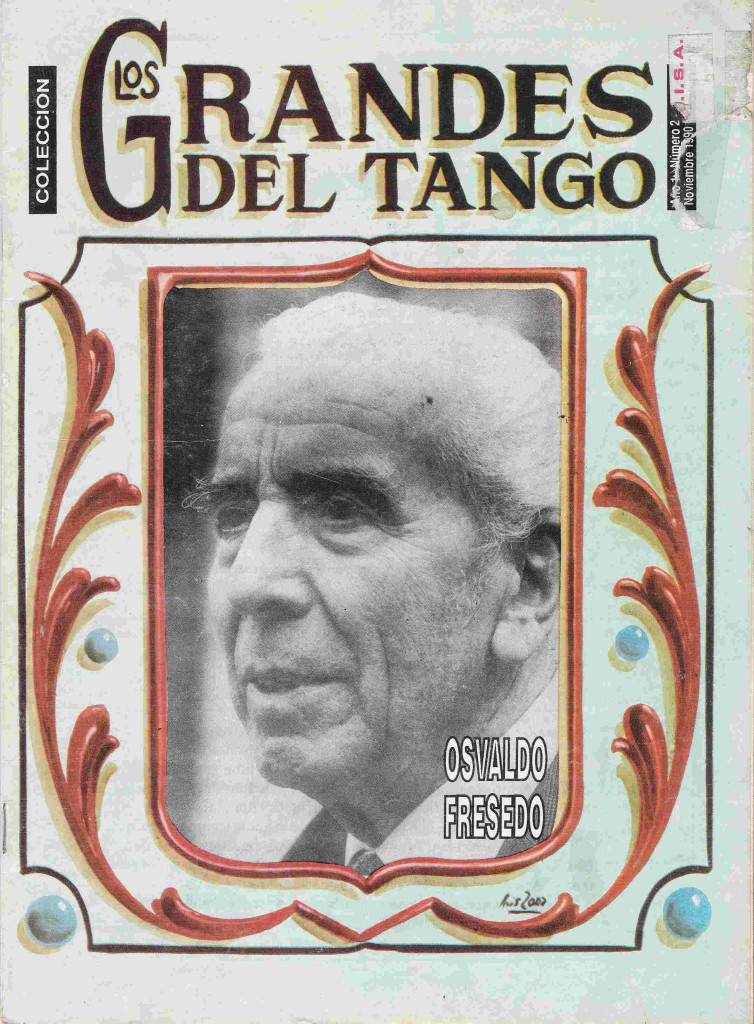 An interview in which the Master explains how he started with the tango, how he made his first creation, the song El Espiante. Later tells us how he created the song El 11, for the internee dance and why it was the last edition of this festival. Ovvero, one night, because of a joke by the students to the rector, he ( the rector ) accidentally fired the university boys, killing one. This is why the course of medical studies “the internee” ( on board ) and its year-end party were abolished.

Born in Buenos Aires, in a family of comfortable economic position, seems to have influenced his art: his orchestra, refined and aristocratic, was the favorite of upper circles. However, despite Osvaldo's father was a rich businessman, member of a shop ( “Buzzetti, Azza y Cia.” SARMIENTO 1164 CABA for those who wanted to visit ndt ), his family moved in La Paternal when Osvaldo had 10 years, a neighborhood somewhat away and humble, with flat houses in a popular surrounding. It was there where he started playing the bandoneon. His was the longest tango career ever found: over 1.250 recordings. along 63 years of activity.

In 1913, he started public performances, as member of a trio, in which his brother Emilio played the violin, and a third member, the guitar. In addition to entertaining local parties, they played at Café Paulin. After performing in other cafés in the neighborhood, he began to be known as El Pibe de La Paternal (The kid from La Paternal) as opposed to the other bandoneon player, Pedro Maffia, known as El pibe de Flores, another area of Buenos Aires, not so far. However, as player Fresedo was not rival for Maffia.

He performed at Montmartre cabaret, invited by his friend Eduardo Arolas, then at the Royal Pigall, at the request of Roberto Firpo. In the 20s Arolas and Firpo were already, two major tango figures as instrumentalists, directors and composers. In 1916, formed a bandoneon duet, Fresedo and Vicente LoDuca, recording in 1917 by Victor's label. One of those is the tango recordings “Amoniaco”, one of his first works.

Later he formed a trio with pianist Juan Carlos Cobián and the violinist Tito Roccatagliata. The meeting between Fresedo and Cobián (become famous with “Los Mareados”, “Nostalgias” and other songs) was decisive for the evolution of orchestral tango of the 20'. The delicacy of taste, legato, the refined taste, legatos, soft nuances and fancy piano solos were targeted to the upper class ears, though embodying the deep arrabal message of the suburbs, always emerging in art of Fresedo.

In 1917 He recorded for the label Telephone as a performer in the orchestra led by Roberto Firpo , Francisco Canaro, It was established to encourage Carnival dances in Rosario, Argentina's second-largest city, on the Parana River. The following year, He formed his first group, that, among others had, the pianist José María Rizzuti (composer of “Cenizas”) and the violinist Julio De Caro, that six years later would revolutionize the genre with his Sextet (composing, in homage to Fresedo, the homonymous tango). Fresedo's performances at Casino Pigall were so successful that his orchestra became the most fashionable.

In 1921, He was hired by the record company Victor and sent in the United States with pianist Enrique Delfino ( author of the romance of tango) and the violinist Tito Roccatagliata integrated with other musicians, to recording by the name Orchestra Tipica Select, fifty tracks. On his return, Fresedo reconstituted his Sextet, relying this time the piano to Cobián. Nobody like them to set up the tango in Buenos Aires aristocratic ball rooms.

Between 1922 and the 1925, He continued to record with Victor, then, switch to the Odeon, he played a historic role: he joined Carlos Gardeon two tracks, tangos “Pèrdon viejita” (by Fresedo himself) , “Fea” . The recording system was still acoustic. In 1927, the Fresedo's success is that it keeps five orchestras in activity simultaneously the main in the cabaret Tabaris on Avenida Corrientes, the most important of the city. This forces him to rotate continuously from one place to another to attend in each room where his orchestra was performing. One of these, accompanied silent films in movie theater Phoenix in Flores, was directed by Carlos Di Sarli, who would become a director at least as successful as Fresedo and clearly influenced by him.

Fresedo dared to introduce new timbres and colors in tango, as the harp and vibraphone, and percussion. He also selected with great care for his singers, to match the refinement of his orchestral style.

In his long career worth mentioning are the vocalists Roberto Ray, Ricardo Ruiz, Oscar Serpa, Osvaldo Cordo, Armando Garrido e Hector Pacheco. He's worked with talented musicians also, instrumentalists and arrangers who contributed to the quality of the orchestra, like the case of the pianist Emilio Barbato and b the andoneonists Roberto Pérez Prechi and Roberto Pansera. For this reason the Fresedo orchestra is enriched with works written by them, things rarely found in the repertoires of other orchestras.

As a composer, Fresedo was prolific and successful, but in general superficial. His most famous tango is the melodious “Vida Mia“, but also renowned were “Pimientas“, “Arrabalero“, “Tango mio“, “The 11 (a divertirse)“, “L&#8217;espiante“, the beautiful “Aromas” “Volveras“, “Sollozos” , “Siempre es carnaval“, “Ronda de ases“, “De academia“, “Porqué” , “Se mi te has olvidado.”