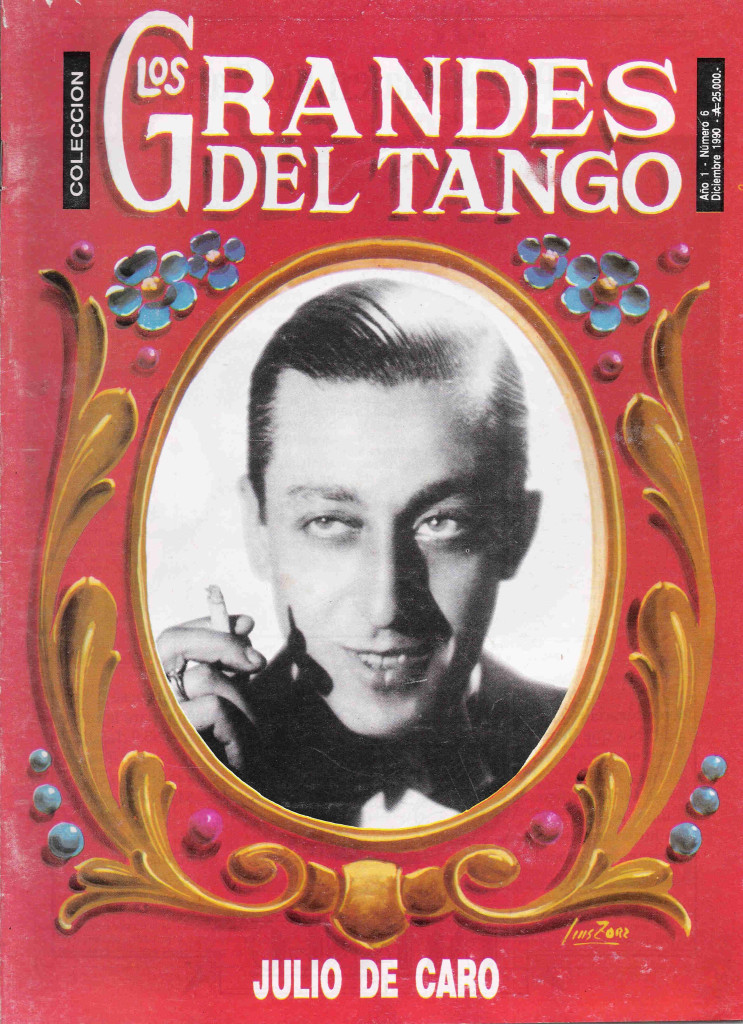 An interview in which the master tells his story. The amount of names you'll hear is awesome, his friendship with Carlos Gardel, and all creators of tango. The experience of its European tour, dinner with Benito Mussolini ( minute 17 )… pretty much the story of the tango in the first person.
For this is identified as one of the pioneers of avant-garde tango.
Was born, December 11 1899, on the same day and the same month of Carlos Gardel.

ndt:
The author of “Mala Junta”,”El Monito”,”Buen Amigo”,Boedo” and many other works, He died on the 11th of March 1980, in Mar del Plata, nella “the Clinic 25 de Majo”, due to pulmonary emphysema caused myocardial infarction.
The protagonist of “Violin Corneta”, concertmaster of the orchestra of Emilio Fresedo, a member of the “Cuarteto de Maestros”, retired artistically in 1953. Leaving to future generations of styles with features beyond the time.

After starting in the second decade of the 20th century , next to the great artists of the time ( Eduardo Arolas , Roberto Firpo and other ), they had transformed the primitive tango , and were influenced by early writers such as Melody ( Juan Carlos Cobian ed Enrique Delfino ), the violinist Julio De Caro from 1924 establishes with its sextet , a new style and transcendental. This will be like no other Center of gravity in the subsequent history of tango , widening its spiritual horizon. So much so that the Expensive school for music and the Gardeliana school in the vocal part , will become models of interpretation of tango and since then are considered by the Supreme Leader in their respective fields.

De Caro maintained the essence of suburban tango , spunky and fun of the initiators , merging with a sentimental and melancholic expressivity unknown up to then , or, he reconciled the folk root with the’ European influence . His higher education in art allowed him to wrap his message in a musical language clean load of ineffable seduction . The recordings of his Sextet , lazy sometimes , sometimes lively , sound like watercolors of Buenos Aires with low houses , Gray facades , avenues , flower gardens , cobblestones and old trams. O, even more, a harmonious social and political order , Despite the strong controls on freedom and economic power , that, brutally ended on 1930 with the global crisis , and that Argentina will start the era of coups d'etat.

Fundamentals are for those who want to understand the idea Decareana the tangos De Caro composed and performed as ” Boedo ” , ” Tierra querida ” and many others . Essential was the contribution of brother Francisco , the pianist and composer of the sextet , author of some of the romantic tangos and dreamers the most admired of all time , come ” Flores Negras ” O ” Loca Boemia ” . The sexteto was the passion of tango of Francisco, paintings of urban landscapes and characters of July , with a versatility never seen before .

Were the fundamental works of Pedro Laurenz, bandoneonist of the sexteto that created timeless pieces, come ” Risa loca” O ” Mal de amores “. In his huge repertoire, De Caro never forgot the great composers outside his group, riarrangiandolo under the new codes, preparing them to be collected in the following decades by hundreds of orchestras, decareane or not. Julio was born in Buenos Aires, in a large house at Pietad 2000 ( Bartolomè Mitre ndt ) in Balvanera, the second of twelve children in a family of Italian origin. His father, Giuseppe De Caro De Sica ( relatives of filmmaker Vittorio De Sica and second cousin of Julio ), wanted for the son a college education and academic musical education. The Ex Director of conservatorio della Scala Theatre of Milan, Don Giuseppe decided that Julio would studied piano and his brother Francisco violin. But the boys exchanged instruments and worse paternal authority challenged devoting himself to tango, causing a rift in the family would never be healed.

Arolas , El Tigre del Bandoneon , hosted him at home and was its artistic godfather, him in his orchestra . later hes moved away from working with Arolas on bandoneon Ricardo Luis Brignolo ( composer of ” Chiqué ” ) , the pianist José María Rizzuti ( ” Cenizas ” ) , the bandoneonist Osvaldo Fresedo ( ” Aromas ” ) , pianist Enrique Delfino (” Recuerdos de Bohemia ” ) e with the bandoneonist uruguayano Minotto di Cicco , alias Mano Brava , to enter the 1923 the sexteto pianist Juan Carlos Cobián ( ” Nostalgias ” ) . When , at the end of that year went to the United States Cobian for recording with the Orquesta Tipica Select, De Caro took the helm of the sexteto left from Cobian, including the bandoneonist Pedro Maffia , Another key figure . Thus began through a violinist, a new era for the tango .

In 1924 He recorded his first disc for the label Victor , two of his tangos recording : ” Todo corazon ” , ” Pobre Margot ” . More Over 30 years have recordered 420 songs , Although the State some collectors claim to have found two dozen more. Most of his discography is concentrated in the period 1924-1932 , It is divided into two major series : Victor , until the 1928 , and Brunswick , from the 1929.

In 1933 , De Caro enter into a phase of experimentation with stamps and expanded new orchestral masses ( Woodwinds , percussion ) , that eventually blurred his message ( He had used 20 years before a curious violin – Cornet ). Then , Fortunately , back to source , costs fall into some anachronism. Guardian until his retirement of the noblest essences , It was a little’ marginalized in the golden age of tango , both for its strict adherence to Decarismo that his difficult assimilation of the central role of the singer in orchestras after the 1940.

He ‘ symptomatic that in the Decade of the 40 , Dadi remains five years without recording.

Between 1949 and the 1953 , Unable to register 38 tracks for Odeon . This series is extremely important as musical heritage , He recorded songs that had been recorded in the past technical with precarious equipment , and includes some new works. In particular , ” Aníbal Troilo ” tribute to the great tango bandoneonist, director and composer. Writes the tango ” Osvaldo Pugliese ” , that was his greatest follower , but there are no recordings , as there are none of the tango ” Piazzolla” , the other great revolutionary of tango. ( Piazzolla replied with his ” Decarísimo ” ).

The December 11 was declared the international day of Tango , because on that date , Although in different years , Sono nati Carlos Gardel and Julio De Caro .