Pura Milonga on the international scene

The article aims to present an analysis / summary of the activity in multimedia channels managed:

TANGOTUBE is a channel run by Syrians followed worldwide, whose focus is to collect "youtube" style material of Argentine tango. The administrators dedicated it a specific section on their server. 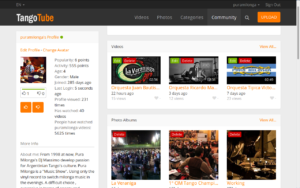 YOUTUBE is the service that provides a powerful analytics.

The Channell was opened much earlier than 7 July 2012, not devoted to publish, but only to view content.

Therefore the following in the article covers the period from 7 luglio 2012 al 1 May 2016.

The channel PURA MILONGA celebrates 400 subscribers, people around the world who consistently follow what is proposed in the profile.

Performance by gender, age and geographical area of the public who follow the channel, whether or not "Subscribers".

Many members are colleagues, even among the most popular internationally, others are organizers and some real personalities widely known in the world of Argentine Tango.

Do not miss the FAN that when they come to experience live PURE MILONGA and are excited to do it.

The channel is almost entirely dedicated to Argentine Tango, is where I chose to publish, not so much the most famous and most played, which would generate a lot of traffic and a good "rating", but instead of little-known material, just heard or rare. Documentaries and interviews that are part of my personal collection, CDs, VINYLS, 78 RPM, DVD, live recordings and milonga nights in which I spent music with vinyl.

The views of the Canal in the WORLD divided by duration of VISION.

Views of the Canal in the WORLD divided by number of VIEWS.

Historical trends of the duration of views.

As in the previous image, it is noted that the curve follows the pattern of uploads. Or as time goes by the number of videos in the channel increases, Therefore some videos have a time much longer than others, and this facilitates the times viewed.

The channel has had a vision of life 3097 days,it or 8,5 years of total time.
Più di 90.000 video opening.
The nation in which they are most watched and followed is l’Argentina, , with a time almost double all’Italy.
This is followed by Colombia , Germany.
At a short distance the other countries in which the tango is very common.

Regarding the material uploaded, the analysis is performed only on songs, the Repertoire doesn't include many major orchestras, but it is more focused on works of "first guard".

Stand out among the Oxigenated tandas taken from the nights of milonga , l’ Orquestra Francisco Canaro that is very popular in Europe, followed by the’Orquestra Donato Racciatti that put 3 Tandas in the early 10 positions: 3° 5° 7° place, from its loading into the Canal had "explosives" success also supported by verified achievements of danceability in milonga.

The objective findings in the milongas where was proposed, “The Tango by vinyl ” in Argentina and in the rest of Europe give to the organizer who will want to have PURE MILONGA in his event , the safety of investing in high and recognized quality product unique in the panorama of the professionals that offer music for Tango events or Milongas.

Documentaries: History and evolution of the orchestras