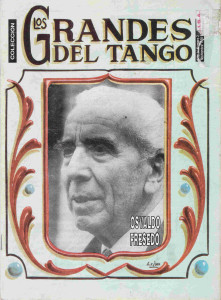 In the static section [button link=”http://puramilonga.it/?page_id=1608″] Pura Tube[/button] trovate la traduzione in italiano della biografia di Osvaldo Fresedo e un’intervista in cui il Maestro spiega come iniziò con il tango, how he made his first creation: the song El Espiante.
Later tells us how he created the song El 11, for the internee dance and why it was the last edition of this festival. Or, one night, because of a joke by the students to the rector, he ( the rector ) accidentally fired the university boys, killing one.

This is why the course of medical studies “the internee” ( on board ) and its year-end party were abolished.

In the static section [button link=”http://puramilonga.it/?page_id=1700″] Pura Tube[/button] find the translation in Italian/English of the biography of Alberto Castillo.
One of the greatest singers that tango had, certainly the "Character" most original that has ever been. A career that began in 1929 and successfully completed in 1993.
Doctor, Singer, Actor, Author and Composer, a Tanguero's life.
Here another documentary channel Volver Tango in this case autobiographical told by Alberto De Luca firsthand.

In the static section [button link=”http://puramilonga.it/?page_id=1675″] Pura Tube[/button] find the translation in Italian of the biography of Carlos Di Sarli and a biographical documentary film directed by Alberto Freinquel,script and research by Dr.. Eduardo Giordalini , produced by a collaboration of public and private enterprises of the cities of Bahía Blanca and Buenos Aires. Contains images, interviews and unpublished material owned by the family Di Sarli.

The biggest and the most important artist and singer that tango had.

In the static section Pura Tube find the translation in Italian/english of the biography of Libertad Lamarque.

In the static section [button link=”http://puramilonga.it/?page_id=1659″] Pura Tube[/button] you can find the translation of Julio De Caro's biography and an interview in which the master tells his story. The amount of names you'll hear is awesome, his friendship with Carlos Gardel, and all creators of tango. The experience of its European tour, dinner with Benito Mussolini ( minute 17 )... the story of the tango in the first person.

The sound quality of the audio tracks that are proposed in tango milonga:

From the graphs we see that an acquisition from a different quality, allow to record more faithful some instruments, and penalizing others.
E’ Clearly, a more graphic vacuum corresponds to a recording less faithful or lower quality.

The following four images of the sound spectrum of different audio formats:

As seen with the MP3 format 1 e 2 you lose almost the entire Bass, the rhythm of the Piano, the Cello and Viola; but also higher harmonics in 10.000 HZ and the lower ones in 60 HZ. How well you lose much of the voice.

The emotions are influenced more by the low mid frequencies, to dance there is based on “carpet rhythmic bass” type songs 1 e 2 mp3 little fit for use in the ballroom as “drains” energy.

This is the result of vision between the graphs ( listenable opening the link ). But in reality the listening test should be done using a Hi-Fi. The comparison will detect more “sharpness” e “bodied” of the various elements for the sizes 4 e 3, and a very sound “kneaded” per 2 e 1.

Also that the “heat” song 4 will be much greater than all the others and with very high volume the sound will remain little annoying ear.

It was not possible to perform a graph 5 “Vinyl” because the instrumentation of the format 4 not getting. The engraving on the disc being analog has a much higher quality.

Almost never the milongas have a sound system suitable to the music of tango, often the acoustics of the room has echoes and resonances. Having a “ingredients” of “high quality” reduces the problems of your room acoustics and improves the energy of milonga. Increase the volume in the room by analogy is a bit like doing the magnification of an image; more is poor before shelling.

The organization offers DJ having libraries with audio formats “in High Quality” and which uses equipment “Hi-Fi”, even digital ones, such as CD players or SOFTWARE SOUND CARDS and Professional, will derive tangible benefits.

The data of the acquisition for sound 3 e 4 used for the tests:

The fundamental frequencies in Hz of music :

Bibliography and notes on’ acoustics:

Back again this year the Maga's Milonga edition 2015.

La Maga, originally a farmhouse used for agriculture is located in the northernmost territory of the province of Reggio Emilia, on the right bank of the river Po, a 36 km distance from Reggio Emilia e 25 gives Mantova. In the municipality of Luzzara it bounded in the north by the municipalities of Mantua Suzzara e Gonzaga, and on east with Reggiolo, on south Guastalla and to the west Dosolo.

The peculiar characteristic of the municipality is that in correspondence of its territory, is the border between the regions of Emilia-Romagna and Lombardy, following previously the downhill course of the river Po, ceases to be, taking as a dividing line tributary (now almost disappeared and reduced to ditch) the Zara (also called Po Vecchio), giving rise to the territory Oltrepò Mantovano.

The host visiting La Maga besides the milonga will have the opportunity to visit historical scene of the battle between the imperial army led by Prince Eugene of Savoy and the Franco-Spanish: the famous Battle of Luzzara. And of events dating back to the dictatorship and the Second World War.

The 5 May 1921 in circumstances never fully clarified the young anarchist Riccardo Siliprandi will be killed from Fascist hands. During the war Luzzara will be turned into powder and weapons depot by the Nazis, will 10 partisans shot in Reggiolo April '45, others 7 fallen during various military operations in the province, missing or dead in concentration camps, civilians arrested and tortured.

The desire for continuity of the design of the offspring, the need to maintain the natural character of reliving the place then and now, when there was dancing in the farmyard, with the orchestras of musicians in the country, at sunset, sometimes you are feeling approaching German planes in hatches to hide in less than no time rushing to turn off the lights, and today the joy of living only to find themselves sharing the same love for music and dance.

With a spirit of "social and cultural", La Maga Association welcomes its guests whether you want to have fun dancing the Tango, whether they want to relax in the hammock or watching the stars with a telescope.

The Milonga of Maga takes place entirely outdoors, roof with a wonderful and immense starry sky, open country. Want to have clothes that if they can repair moisture Night. Around us there is a large wood, cultivated fields, pheasants, hares, herons and other animals of the field that we observe without being seen but the most curious!

The visitor will have water, fresh fruit, snack, mocha coffee, showers and toilets, camping area.
Those who stay in tents, There will be breakfast on waking.

Ad 1 km there are B&B, farm with rooms, pizzerias and Tigelleria, but Dining Lunches.

There is also grill and stove, which are available to everyone at any time, so it can serve up some’ patience to use the equipment.

Culture and social They are supported by Dj Massimo that on Saturday evening and Sunday afternoon will curate the "Library" supplied of historical texts and games themed Tango. This section also antiquities market with vintage vinyl and scores.

Non-stop music, and to maintain the level of energy, of pizza 23,00!

but the place is so dodger that some navigator will have trouble finding!

Set Luzzara via Villa Superior 63, you will find an indication of the milonga on highway

Participants must respond to the invitation you receive in e-mail fb p, if there is still received write in private.

Attending The FB does not apply in order for the event.

The event is sponsored by the Cultural La Maga

Dj Massimo has a thematic Youtube channel to which you can turn on to listen to the contents of Tango, historical, multimedia documents, but also of the moments of milonga “live” in which he played the original vinyls Pura Milonga “Tango vinyl”.

Below the video demo presentation of "Pura Milonga" “"The Tango by Vinyl" music show.”