Since many years ( 17 ) I'm lucky to be able to reside in Buenos Aires for medium / long-term periods.
When they are there in addition to sightseeing and to perform my DJing and organizing milongas, as they say in general “I see people”, “I know people”, “I find things”.
The story goes that far in November 2003 My 1st time in Buenos Aires decided to stay at’ Hotel Astoria in The. de Majo 916. 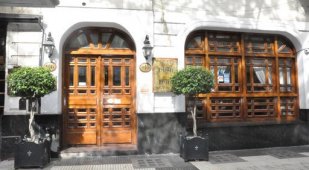 Not knowing that it was located right in front of the Cafe Tortoni and all'A.N.T. National Academy of Tango.

The fact is that disposed of jet lag on the following day I entered the ANT and adjoining Museo Mundial del Tango, I visited it and since it was going to start a class I stopped to pick her up,
during that lesson ( mine 1 di Tango in Buenos Aires ) we were very few came to visit Horacio Ferrer that shook our hand to all…..

From that 2003 I made many contacts, with various people who are related to the world of tango, both tango-dance,
organization-tango, tango-musicians / more or less known singers, but all equally important.
Among all these people there are also academic dell'A.N.T.

In 2017, I also participated in the III ° Congress National "TANGO, Culture and identity "" Tribute to the 100 years of the start of the Tango-song ",
and now when I can participate in the round tables “Tango and Champagne” now become “Walter Chè What is Tango?“.

Hosts of this meetings are academics Josè Maria Kokubu “The ponja Malevo” e Walter Piazza the latter one of the co-founders dell'A.N.T.

In short the 14 December 2019 I attended a meeting with the theme "AROUND THE TANGO OLYMPIC!”
The meeting counted on the special participation of the academic in charge for the sector “Dance” or the Master Carlos Rivarola.

And the development of the proposed topics focused on the evolution of tango dance.
All this to give some meaning and a reason to what we're going to see now.

(evolution of the Tango-Dance Path,
anecdotes and contacts with politics and how he founded the ANT)

In the first part Jose Maria Kokubu ( hereinafter called “Pepe” ) introduces the godfathers Victoria Corsini ( grandson of TAL Corsini ) e Carlos Rivarola, It refers to the discourses developed in previous meetings to start talking about how the dance has been incorporated to the music, starting from an external encoded movement to then evolve into a choreography suggested to then finally get to be the visual manifestation, the representation of music.
N.d.a. ( the meetings are very relaxed, you will notice the typically expansive sociability of Porteños )

In this second part addresses the theme / myth of the Tango-Dance dance between persons of the same kind. Walter retraces through testimonies and video documents how the Tango-Dance has crept in, and managed to fit in all social strata. Beginning with its first mass distribution system, or the peddler Organetto, to get step by step to be protagonist in the years ì'70 of Tourism Promotion of Argentina.

In this third video Walter presents examples of the great tango dancers, with an emphasis on how they relate to the type of musical performance and each other.
He passed the baton and academician Maestro Carlos Rivarola who starts to talk about how was his experience at the beginning with the big, those who brought the tango-dance on stage for the first time. Ed exposes with various examples ( for privacy they have been censored in the video because these are people who currently work and meet in the milonga ) as the Tango-Dance began to be affirmation of individual identity and social position.

The Master tells of his experiences in the various works of which he was a member, how is fond of Tango Japan, but especially it focuses on why the Tango had a decrease in the years 60.
A very important reflection ( I had already been told by some friends and milongueros here is confirmed ) that debunks some preconceptions rooted badly abroad.

He also talks about how the artist's life Tango difficult and complicated when it goes on tour, how are the relationships with “tangueros” foreigners.
Influence of politics with Tanguero world

In this part he intervenes Walter recounting how he and Horacio Ferrer They have managed to get to the A.N.T. the property of the building in which currently has headquarters.

Carlos then returns talking about how social Tango of today and how it has evolved over the world of Tango-Dance.
There is talk of milonguera nightlife in the world.

Of the reasons why people are driven to remain and progress in Tango.

He concludes the presentation and begin anecdotes and interesting reflections.

The following are the reflections of the round table and a story by Carlos Rivarola how he began the adventure of the show Tango Argentino.
Of the trip to a military transport plane from Buenos Aires to Paris.
Especially how he changed the attitude of the French towards the artistic troupe before and after the presentation of the show.

Pepe concluded the meeting with an invitation to disseminate and raise awareness of the Tango all.

Acknowledgments:
The video material is owned by the J-Key Stream Line Argentina & National Academy of Tango, Thank academics for making me a participant of their initiatives.
I wish you all to repeat as soon as the meeting with other issues.