History of radio in Argentina 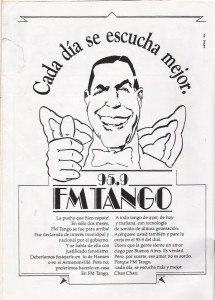 The stations in amplitude modulation ( AM ) traditional and most important, based in Buenos Aires, They have been: National, From the city ( ex Municipal ) and Province ( La Plata ); le radio private; Splendid, Belgrano, Rivadavia, The world, La Red ( ex Excelsior ), Mitre, Continental, Del Plata, America, in Buenos Aires ( former Del Pueblo ) and Radio 10 and Chain 3 Cordoba which was the first national coverage.

The 1920: And 'it considered as the year of the opening of the radio, the live broadcast of Richard Wagner's Parsifal opera from the Coliseo Theatre in Buenos Aires , It took place 27 August 1920 , by means of the Radio Society Argentina composed by Enrique Susini Cesar Guerrico , Miguel Mugica , Luis Romero and Ignacio Gomez, that installed a transmitter on the roof of the building , and who are remembered as “The crazy roof” ( The lunatics roof ).
The introduction of the appliances amplified ( before they used the radio in Galena ) substantially change the conditions for listening. The radio receiver gain an important place in the house, riunendola family around . At the same time, start conflicts between the first stations are generated by the use of the frequencies, that lead in the last years of the decade the first regulations on the emission frequencies, anno 1930.

The 30's were those of the success of Radio Splendid , Belgrano and El Mundo, the latter founded in 1935.

Jaime Yankelevich , owner of Radio Belgrano is considered the most important era impresario, creating the first chain drives with the stations that were ushering in major cities of the country , forming the giant chain, Cui seguirono the Splendid Argentina Broadcasting Network and the blu di Chain and White Radio Cadena Argentinas and World , that would last nearly three decades .

Born broadcasters like Casa América ( then called Callao and later Libertad ), It is in the 1937 State Radio, the first state broadcaster, the current Radio Nacional.

The decade of the 40s was the golden era for radio . The election campaign of decisive 1946 , which he led to the triumph of Juan Domingo Peron , She had the radio as the center stage.

They became very popular comedy programs. Nini Marshall debuted in 1940 with characters ” Candida ” , ” Quaint ” , although from 1943 years were banned by the Dirección Nacional de Radiodifusión since they had a popular language. The call to the popular language was later repealed by the Peronist government.

In 1944 Luis Sandrini presents his character ” Felipe “, that would become famous and ran for years. Other comedians of the moment were Tincho Zabala, Pepe Arias, the dúo Good-Striano, Juan Carlos “Pinocchio” Mareco y Pepe Iglesias “the Fox”.

Special mention to the character ” Mordisquito ” created by Enrique Santos Discepolo , who was sympathetic to Peronism, imaginatively that spoke of the reality of the country in those years .
Among music programs, note El fogon with Antonio Tormo and his group Tropilla Huachi Pampa , dedicated to folklore. At the same time they had ample space typical orchestras, Jazz and the soloists.

At the end of the decade, the federal government withdrew all private licenses and gave birth to the creation of new radio stations in the country.

The 50 are those of the birth of television, that would be expanded in the next decade, occupying many areas airing before the radio. The first television station in the country ,Channel 7, It was owned by Radio Belgrano.

From 1957, with the establishment of the military dictatorship Revolución Libertadora most radios were confiscated by the State. With the new regulation of broadcasts, the communication medium enters a period complicated.

Censorship and the preparation of program content became frequent. During this period, 1955-1958, figures reminiscent of the deposed government of Peron were banned, among the most popular artists to remember as: Hugo del Carril, Alberto Castillo, Tita Merello, Nelly Omar, Luis Elias Soji, Américo Barrios.

In the middle of the decade the spread of the portable transistor radio listening conditions change. The receiver was moving with the listener, strengthening loyalty to one station or item in particular.

Currently the Radio Tango pincipale is the issuer LS1.

LS1 Radio de la Ciudad is a radio station that broadcasts from Buenos Aires in the frequency 1110 kHz AM. He’ managed by the Government of the City of Buenos Aires.

Its programming consists mainly of information and cultural programs.

Studies of Once Diez. This station is born with the name of Radio Municipal, the 23 May 1927. His mission was mainly radiate the opera performances at the Teatro Colon in Buenos Aires and spread best classical music and cultural expressions.

Its emission frequency in the old dial was to 710 kHz medium wave and for decades has enjoyed the status of “free line” or any other broadcaster in South America broadcast on that frequency, therefore its output capacity (100 KW) , He allowed her a very large range of coverage. There have been reports from Cape Town in South Africa, who listened to the broadcasts of Radio Municipal Night, taking advantage of ionospheric propagation.

Radio Municipal , in its golden years ( decades of 20 , 30 , 40 , 50 of the last century ) He has had a permanent orchestra and with a cast of soap opera , which he remained active until the early '90s . Since January 1998 he was re-assigned frequency 1110 kHz AM , formerly occupied by LR2 Radio Argentina , declared bankrupt … its old frequency of 710KHz is currently used by Radio 10 , a private radio station.

Municipal radio was one of the first to release experimentally in 1977 service on FM 91.9 MHz . Under the name of The Metro Municipal broadcast classical music from 16 Everyone 2. It has coverage reduced and limited to the capital . From 1994, It began broadcasting on a new frequency that allows for more power output, i 92.7 MHz FM.

Start planning as FM Tango, then becoming 2x4 abandoning classical music for a proposed 24 hours devoted to music of the city Argentina.

Headquarters, such as studies and its plant in frequency modulation , They are located in the heart of Buenos Aires , al 8 Floor of the Cultural Center San Martin , Sarmiento 1551.