Documentary: Bandoneon history and its interpreters 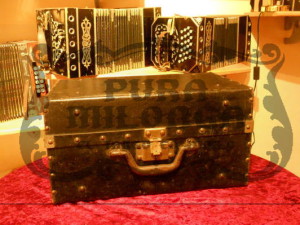 The bandoneon is a wind instrument free bellows, relative of concertina ( German Konzertina ), rectangular, square section and particular shape of sound. Its original name in German is bandoneon, but in the Rio de la Plata established the word ” bandoneon ” for the instrument.

He’ Germany was initially designed as an evolution of the concertina. Its initial use was as a portable organ for religious music; given the sound melancholy sacred and unique. Arrived at the Rio de la Plata at the hands of sailors and immigrants , It has been adopted by musicians of the time and helping to form the unique sound of the Tango, becoming the symbol.

He’ widely used in the Rio de la Plata, particularly in Buenos Aires, Rosario and Uruguay, connecting it with the tango. He’ also popular in Mesopotamia Argentina for its use in Chamamé, particularly in the province of Corrientes.

Other provinces that are affected, Santiago del Estero and Salta per Chacarera and Zamba. He’ present in other types of music that are on both banks of the River Plate, like Chimarrita the Chamarrita, the “Vals”, and also the “Milonga”, in Uruguay and in Argentina.

The development and evolution of the bandoneon are rather uncertain, but the main contributors to the project were Carl Friedrich Uhlig (1830) e Carl Zimmermann (1849). The name comes from the German bandoneon, and this stands for Heinrich Band (1821-1860), who he was one of the first to engage in market.

Below the two-part documentary by Tango Volver.

The factories of the most recognized bandoneón are those of the dynasty Arnold . In 1864 Louis Ernst Arnold ( Carlsfeld ) acquires the factory of Carl Friedrich Zimmermann and the production of A bandoneon ( Ernst Louis Arnold ) it begins . His retirement in 1880 , one of his sons ( Ernst Hermann Arnold ) takes over the management of the company.

Ernst Louis Arnold died in 1910. The following year Paul and Alfred ( two brothers of Ernst Hermann Arnold ) They opened his own factory in the same city of Carlsfeld.

Alfred Arnold dies in 1933 and Paul Arnold in 1952. Supersede in Arno Arnold production (son of Paul) e Horst Arnold (son of Alfredo).
In 1949 DDR expropriating the factory to make it a “factory town” ( founded in 1952 per Klingenthaler Harmonikawerke) leads to near extinction the bandoneon.
Paul Arnold nel 1950 He manages to escape to the west and to initiate its own factory in Obertshausen, that lasted until shortly after his death.

The bandoneon is currently in danger of extinction in both Argentina and Uruguay.

it begins 50 years that the German factories of bandoneon greater impact (ALS and AA) They are closed.

The lack of qualified personnel, tools end up falling into the hands of non-professional repairers that end up ruining the tool.

Those that existed in Argentina (country where it has developed most of the playing technique of the instrument ) many have deteriorated in the normal operation, misuse, improper storage or bad repairs.

For reasons of cost of import from European plants do not arrive in South Amerca new bandoneones.

In Argentina e Uruguay, the instruments used are owned by their German marks AA or ELA and often the instruments are measured at a very high price just for the brand or general condition external, which makes them almost inaccessible to the general public. This cost, often, It does not consider the sound quality of the instrument (ELA German factories and AA, at the time they were producing various types and qualities of bandoneon ).

The 1 October 2009 tango is declared world heritage, luthiers Angelo Zullo and his son Gabriel are the first Argentine bandoneon AZ, result of five years of development in the building of machines and tools designed to build all parts.
The musician Ruben Juarez has tested and approved the device in a concert held at the National Center of Music and Dance, organized by the Association of Argentine luthiers.

Currently, AZ are manufactured in Buenos Aires at the request and in the traditional way.
it begins, in Argentina, l'OT (Typical union Orchestras), and civil society La Casa del bandoneon to reverse the situation, began to collect signatures for the bandoneon is declared Cultural Heritage of the Nation.
Exhibition of original instruments are in museums in Germany the family Preuss in Lichtenberg, and family Steinhart Kirchzarten / Freiburg.