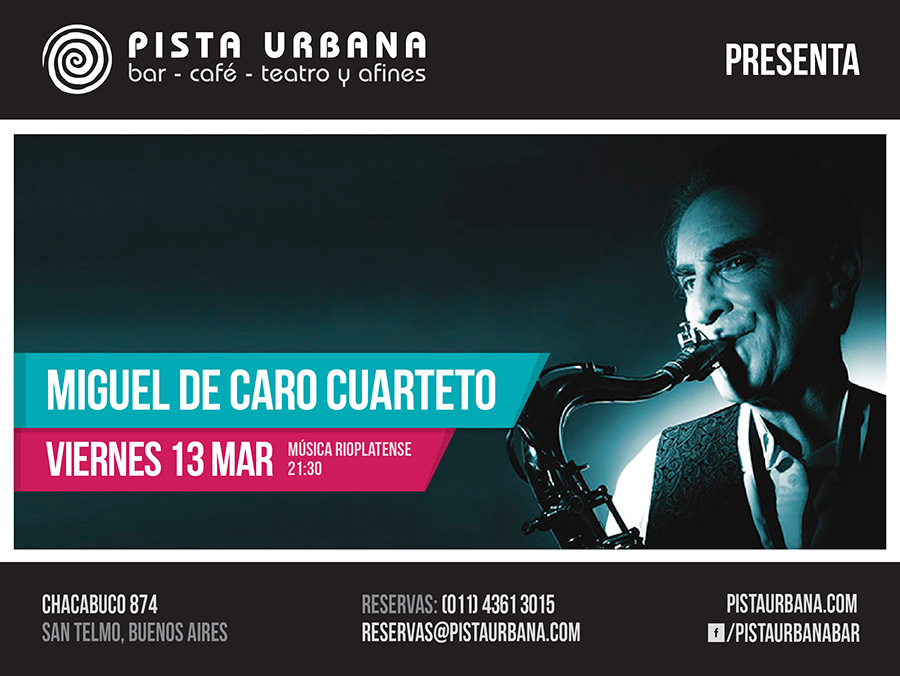 Miguel De Caro, begins its cycle 2015 Track Urbana, with a cycle of monthly presentations to year end.
With its recent formation will continue premiering repertoire, as it did during the second half of 2014.

Shall include, besides tangos and milongas, rioplatenses other music like candombe and some folk pieces.
It will provide for public Track, a recital of the most prominent themes of his entire discography, including his latest work, “Escualo” (editado por Acqua Records).

ABOUT MIGUEL DE CARO:
Tango Artist, Miguel De Caro is a composer, arranger and saxophonist. De Caro plays both original compositions as tangos and milongas classics of the genre. In addition to his performances at national level and their teaching, He has made several presentations in Europe, performing in venues, Jazz clubs and Milongas Switzerland and Italy, Brazil and USA.

In recent years he has participated in several official cycles of the Ministry of Culture of the City of Buenos Aires: “Tango from both sides” (Montevideo-Uruguay ); “La Gran Vía de Mayo” ; in Buenos Aires Tango Festival IX , Celebrations for the Foundation of the City of Buenos Aires . Their units in other official cycles are: VII Buenos Aires Tango Festival ; Golden Hall of the House of Culture ; Open Studio program closure Buenos Aires- Av edition. May; Notable Bars cycle 2004 and 2006,2008 and in the celebrations of the anniversary of the Reconquista Bs. As 2007; in the Golden Hall of the Teatro Colón performing works of contemporary music Maestro Eduardo Tejeda and the National University of San Luis.

Massimo Tessari is a collector musicologist of Argentinian Tango. He knows the most hidden places of Buenos Aires, and here he procures the documentation e and the material of which is passionate. It is in contact with musicians, historians and collectors of the genre. He teaches musicianship and music history, the costume, harmony and rhythm more and more frequented by those approaching the Argentine Tango consciously. He is co-organizer of the milonga La Veraniega, the outdoor milonga in Buenos Aires. In projects Pura Milonga / Bien Pulenta brings his research and knowledge of Porteña culture,it.